Speech is the ability to use your lips, tongue and other parts of your mouth to produce sounds.

For speech, children need to understand different sounds and the rules for putting those sounds together in their own language.

It is quite normal for children to make speech errors during the first few years of speech development. Around three years of age, most of what a child says to others (e.g. parents, siblings and so on) can be understood (speech intelligibility), most of the time. In other words, most three year old children have at least 80% speech intelligibility. 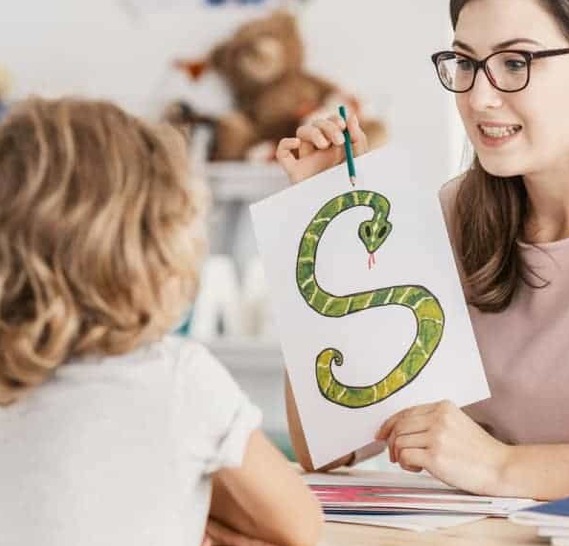 There is a difference between a speech delay and disorder, although a delay can be classed as a disorder if the delay is significant.

A speech delay is when the child is following the expected pattern of speech sound acquisition BUT at a slower rate than expected for their age.

A speech disorder is when the child’s speech development is atypical, in other words, the child is not acquiring the speech sounds in the order expected. They may find some more complex / later sounds easier to produce than sounds which normally develop earlier and are easier to say.

If you’re worried that your child might have a speech sound difficulty, think about how often people who don’t know your child have trouble understanding what your child says.

When a child is two, an unfamiliar person should understand about half to three-quarters of what the child is saying.

When a child is three and older, an unfamiliar person should understand the child most of the time, even though the child will probably still say some sounds and words differently from adults.

Some speech disorders happen when a child has a physical problem (like a cleft palate or tongue-tie) that makes it hard for the child to create certain speech sounds. Others have trouble because of a hearing impairment (deafness) such as ‘glue ear’ (otitis media). There may be no obvious reason for their speech delay or disorder.

Speech disorders are different from language delay or disorder.

Does your child show any of these signs?

You may be referred to an audiologist, for a hearing test, if there’s a possibility that your child’s speech problems are caused by a hearing impairment.

It’s normal for young children to pronounce words differently from adults. There’s no need to correct them every time they make a mistake – this can be frustrating for everyone.

If you want to encourage your child, gentle reminders can help your child pronounce words the right way. For example, if your child says, ‘I see a tat’, you could reply, ‘Yes, there’s the cat’  ‘What is the cat doing?’ This involves repeating the missing or different sound – ‘cat’ – with a slight emphasis.

If your child’s speech is really hard to understand, here are some ideas for helping your child to communicate:

What not to worry about with speech development

Although children might be able to make the right sounds, they might not use them correctly in words in the early years. And while they’re learning to talk, children simplify adult speech to make it easier to say.

This means you probably don’t need to worry if your young child:

These types of speech errors are quite normal and to be expected for a three year old, however if your child is making lots of speech errors, you can’t understand what they are saying or you act as ‘interpreter’ or they become frustrated when trying to make themselves understood, then they may need our help.

How can the Speech and Language Therapists, at Articulate, help my child?

We’re on Your Team. We understand how tough it can be to find the right therapist and also get the right amount of therapy for your child. At Articulate, we provide what your child needs. We treat the child, in addition, as part of each session we also train the parent to do ‘therapy’. This empowers parents with the skills to support and develop their child’s speech, language and communication. Together we get better results, faster.